The Advocate Names Pope Francis Person Of The Year 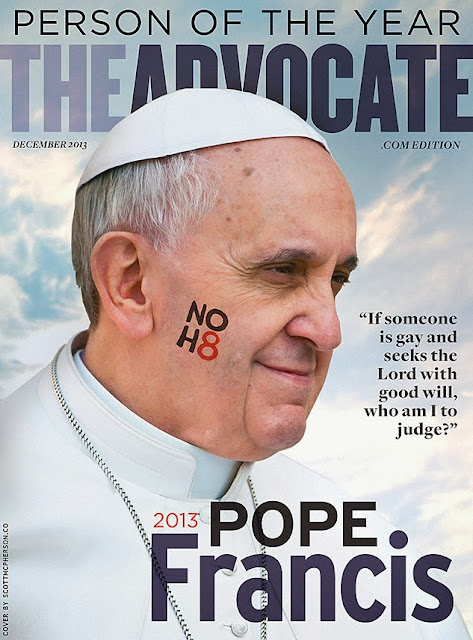 My view on this has changed since the announcement that Francis was the new Pope.

On the heels of Time Magazine naming Pope Francis person of the year, the nation's oldest gay magazine The Advocate has granting the head of the Roman Catholic church the same honor.  Even though the church's stand on LGBT issues have not changed, his words of tolerance and non-judgement have stirred quite a conversation within the religious and non-religious communities! I kind of agree with both publications.

The most influential person of 2013 doesn't come from our ongoing legal conflict but instead from our spiritual one — successes from which are harder to define. There has not been any vote cast or ruling issued, and still a significant and unprecedented shift took place this year in how LGBT people are considered by one of the world's largest faith communities...

...Pope Francis's stark change in rhetoric from his two predecessors — both who were at one time or another among The Advocate's annual Phobie Awards — makes what he's done in 2013 all the more daring. First there's Pope John Paul II, who gay rights activists protested during a highly publicized visit to the United States in 1987 because of what had become known as the “Rat Letter” — an unprecedented damning of homosexuality as “intrinsically evil.” It was written by one of his cardinals, Joseph Ratzinger, who went on to become Pope Benedict XVI. Since 1978, one of those two men had commanded the influence of the Vatican — until this year.