The One Million Moms group hate all things gay. They especially hate when Corporate America expresses the support for the LBGTQ community in words and deeds. Here is their latest email/money beg about Tylenol's #HowWeFamily campaign.

Gay and lesbian couples are featured prominently in Tylenol's new #HowWeFamily campaign, which aims to change the face of the American family.

A same sex prom couple and two gay dads with a baby are among those featured in the campaign's first TV ad. A voiceover declares, "Family isn't defined by who you love, but how."

Tylenol is glorifying all modern family types by stating a family is based on love not traditional marriage, and then showing gay couples with their children. One Million Moms believes family is based on love, but this does not justify normalizing sin. 1MM does not agree with the need for Tylenol to support same sex marriages or couples.

Plus, Tylenol recently used a lesbian couple shown nose to nose in a printed magazine ad. It was included in Good Housekeeping June 2015issue on page 21, to name one example. At the bottom of the ad it states that Tylenol is a national corporate partner with the Human Rights Campaign.

Here is a video from the Tylenol campaign:

Seriously, they are more obsessed with Gay Marriage than most gays! And, has anyone explained that this is about CIVIL Marriage rights? Worship however you please. Just stop trying to deny us our CIVIL rights.
Via Raw Story:
“WHEREAS, the redefinition of marriage to include same-sex couples will continue to weaken the institution of the natural family unit and erode the religious liberty and rights of conscience of all who remain faithful to the idea of marriage as the conjugal union of husband and wife,” the resolution said.
“Southern Baptists recognize that no governing institution has the authority to countermand God’s definition of marriage,” the statement continued. “No matter how the Supreme Court rules, the Southern Baptist Convention reaffirms its unwavering commitment to its doctrinal and public beliefs concerning marriage.”
In his presidential address to the 5,000 attendees on Tuesday, SBC leader Rev. Ronnie Floyd said that it was time for Christians to declare “spiritual warfare.”
Posted by Bert65 at 11:22 AM No comments:


Will the media call him a troubled loner or a right wing terrorist?

The white 21-year-old man reportedly identified as the suspect in a Wednesday night mass shooting at a historic black church in Charleston, South Carolina that left nine people dead appears to have white supremacist leanings, according to an expert on domestic extremism.
Mark Pitcavage, the director of investigative research for the Anti-Defamation League, told TPM on Thursday that two patches Dylann Storm Roof wore on his jacket in a photo from what appears to be his Facebook page are symbols of the white supremacist movement.
Posted by Bert65 at 9:16 AM No comments:

He came out as so he could encourage young and elderly people who are struggling with their sexuality to feel better about themselves. Good for him and the people of South Bend, Indiana.

Via The New Civil Rights Movement:

South Bend, Indiana has a population of just over 100,000 people. It's a conservative town, settled by Polish Catholics. Its largest employer is the University of Notre Dame. And it has a gay mayor.

Democratic Mayor Pete Buttigieg is 32 years old. He is a Rhodes Scholar and a Harvard grad, and he served in Afghanistan, where he was a Lieutenant in the Navy.

"I was well into adulthood before I was prepared to acknowledge the simple fact that I am gay," Buttigieg wrote in a lengthy op-ed published in today's local paper. "It took years of struggle and growth for me to recognize that it’s just a fact of life, like having brown hair, and part of who I am."

"Putting something this personal on the pages of a newspaper does not come easy," he acknowledges. "We Midwesterners are instinctively private to begin with, and I’m not used to viewing this as anyone else’s business."
Posted by Bert65 at 9:26 AM No comments: Scott Walker wants to party like it's 2004! Apparently, the last 11 years of marriage equality progress have not taken place in his little world. To his credit, he is trying to appeal to Republican primary voters. So, as far as gay marriage goes, he should try to party like it's 1959.


Potential Republican presidential candidate and Wisconsin Gov. Scott Walker says that he would support a constitutional amendment allowing states to enact same-sex marriage bans.
"I personally believe that marriage is between one man and one woman," Walker said Sunday on ABC News, answering a question about an upcoming Supreme Court decision on same-sex marriage. "If the court decides that, the only next approach is for those who are supporters of marriage being defined as between one man and one woman is ultimately to consider pursuing a constitutional amendment."

This is NOT "individual A", who the former House speaker is suspected of paying hush money to keep quiet about sexual abuse. Sadly, this alleged victim died of AIDS in 1995.

A woman on Friday came forward to ABC News to allege that her late brother was sexually abused by former House Speaker Dennis Hastert (R-IL) when the brother was a high school student.
Jolene Reinboldt told the news outlet that her late brother, Steve, came to her in 1979 — eight years after he had left high school — to reveal that he was gay. When she asked him who he had his first sexual experience with, she said Steve responded, "It was with Dennis Hastert."

“[Steve] just told me the basics. I believed him 100 percent," she told ABC News. "But he never went into any details — where it happened, or what the sexual experiences were like, anything like that."
Jolene Reinboldt said her brother told her Hastert, who was a high school teacher and coach in Yorkville, Illinois before being elected to Congress, abused him throughout his four years of high school. Steve Reinboldt was the student manager for the wrestling team, which Hastert coached, and he was also a member of the Explorers troop Hastert ran, she said.

By now, you have probably seen the many photo memes mocking the "bravery" of Caitlyn Jenner for telling her story by comparing her to the bravery of our military members. Here are just a few: OK. the first issue:
Why do we need to belittle anyone's bravery by comparing it to someone else's? The answer is bigotry towards transgendered people, plain and simple. The only reason to disparage the true courage it takes for any transgendered person to live openly and honestly is transphobia.

Here's the second issue:
The top photo meme is a lie. Noah Galloway is a truly brave man. We should honor is service and his loss. However, he was never a "runner up" for this award.

In a statement to MTV News on Wednesday (June 3), an ESPN spokesperson confirmed there is “no such thing as a runner up for the three major awards,” referring to the Arthur Ashe Courage award, the Pat Tillman Award for Service and the Jimmy V Perseverance Award.

Also, The Terry Coffey facebook post has been updated by Terry himself which has some humbling irony that he rightly points out. 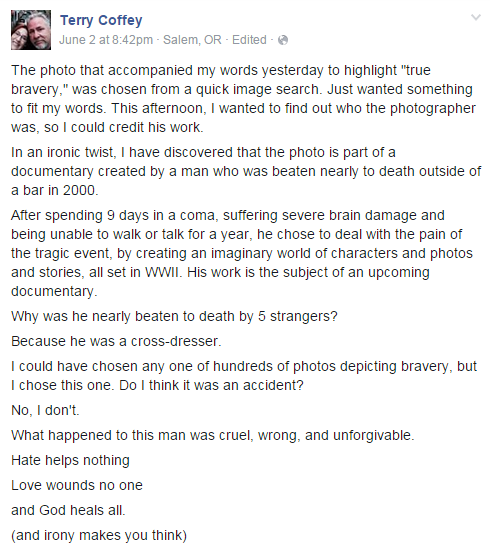 Here is the best meme I seen about this issue, by far! “For those who do not think that we are under threat, simply recognize that the fact that we are now in city after city watching ordinances say that your seven-year-old daughter, if she goes into the restroom cannot be offended and you can’t be offended if she’s greeted there by a 42-year-old man who feels more like a woman than he does a man.”

What astounds me is the lack of empathy and the willful ignorance of what it means to be transgendered. The statement gets better.

“Now I wish that someone told me that when I was in high school that I could have felt like a woman when it came time to take showers in PE,” said Huckabee. “I’m pretty sure that I would have found my feminine side and said, ‘Coach, I think I’d rather shower with the girls today.’ You’re laughing because it sounds so ridiculous doesn’t it?” 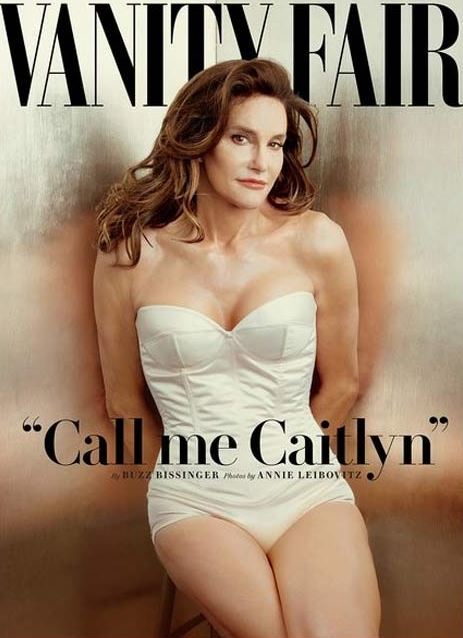 I'm so happy after such a long struggle to be living my true self. Welcome to the world Caitlyn. Can't wait for you to get to know her/me.
— Caitlyn Jenner (@Caitlyn_Jenner) June 1, 2015