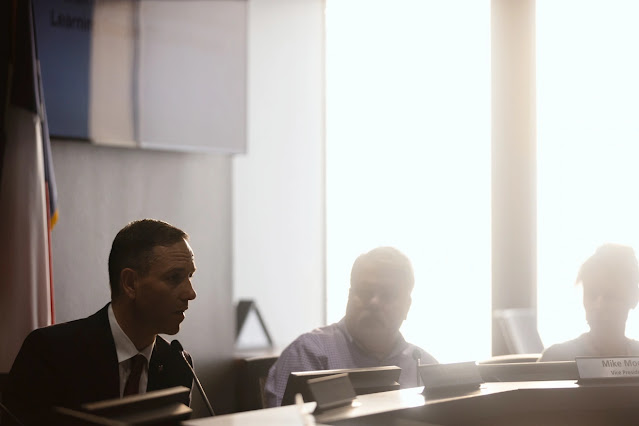 Granbury Independent School District Superintendent Jeremy Glenn (Left)
In a continued attack on the LGBTQ community, the state of Texas is leading the charge.

Via The Texas Tribune:

In early January, a day before students returned from winter break, Jeremy Glenn, the superintendent of the Granbury Independent School District in North Texas, told a group of librarians he’d summoned to a district meeting room that he needed to speak from his heart.

“I want to talk about our community,” Glenn said, according to a recording of the Jan. 10 meeting obtained and verified by NBC News, ProPublica and The Texas Tribune. Glenn explained that Granbury, the largest city in a county where 81% of residents voted for then-President Donald Trump in the 2020 presidential election, is “very, very conservative.”

He noted that members of Granbury’s school board — his bosses — were also very conservative. And to any school employees who might have different political beliefs, Glenn said, “You better hide it,” adding, “Here in this community, we’re going to be conservative.”

That’s why, he said, he needed to talk to them about some of the books available in the school district’s libraries.