on August 11, 2012
We still need to see this.  Gay children need to know about this, especially in these times, when our freedom of speech is considered less valid than those who oppose us and our relationships.  We need to hold up these examples to show the world that we have always existed and we always will.

Ryan Grant Long's education encompassed graphic art and design, LGBT studies, anthropology and sociology. It all comes to bear in his MFA project from 2009. Below, Long writes on the project:
For my MFA thesis show, I designed a calendar that explores same-sex affection throughout history. I chose the calendar format for several reasons, not least of which is that the calendar is one of the most ubiquitous art forms on the planet. In contrast, LGBT people are often cast as the abnormal, subversive or abject "Other," even (or especially) in academic "queer theory" discourse. This work stands to correct that, inasmuch as homosexuality is a normal variation of human sexuality, and gay people have always existed and contributed to society. At the same time, this work intentionally overcorrects and almost takes on the form of hero worship, in its focus on great historical figures, and compositions and poses that echo those of conventional romantic images found in romance novels, movie posters and storybook fairy tales.
August 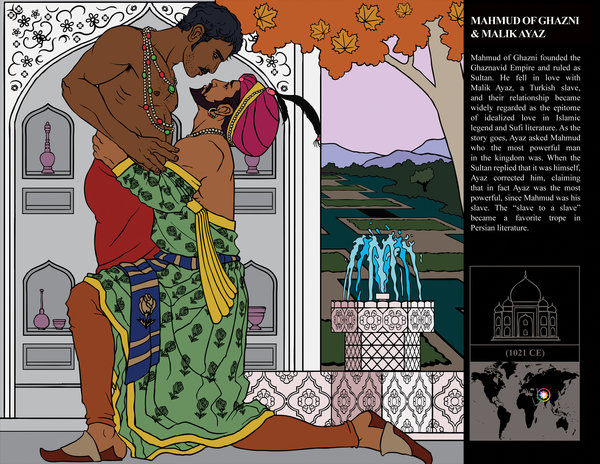 Mahmud of Ghanzi founded the Ghaznavid Empire and ruled as a sultan. He fell in love with Malik Ayaz, a Turkish slave, and their relationship became the epitome of idealized love in Islamic legend and Sufi literature. As the story goes, Ayaz asked Mahmud who the most powerful man in the kingdom was. When the sultan replied that it was himself, Ayaz corrected him, claiming that in fact Ayaz was the most powerful, since Mahmud was his slave. The "slave to a slave" became a favorite trope in Persian literature. —R.G.L.