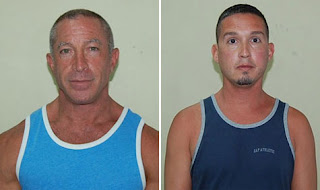 Now, it's getting interesting!  Queerty has allegedly obtained a photo of the gay couple arrested in Dominica for having gay sex on their cabin's balcony, in full view of everyone on the dock.  I had previously stated that we knew this was not the case...Apparently, I was wrong. 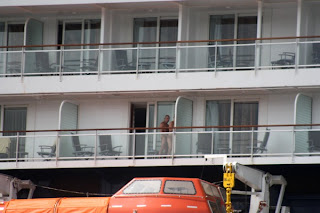 My boyfriend and I, and a busload of other guys, did see what was happening on the balcony of the Celebrity Summit as we waited for our excursion to depart.
At first, I wasn’t paying attention, until I noticed a few Dominican females near the security gate of the pier where the ship docked, waving their arms and hands towards the ship, and talking loudly about something on the ship. The others on board the bus also looked, and we noticed one, then two guys on the balcony walking around naked. My first thought was, ‘If we can see them, can they see us?’
The ruckus at the dock became more excited when it appeared, at first to me, that they were engaging in oral sex. The two guys in front of me then said, ‘No, they are fucking!’ 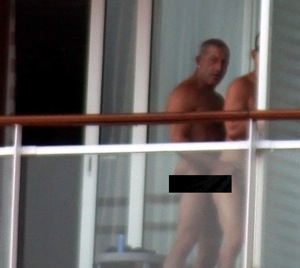 Different accounts have been reported of what Celebrity Summit passengers John Hart and Dennis Mayer were doing on their balcony when they were arrested by police on the island of Dominica. It’s also been debated how visible the men were to witnesses on the docks.
An anonymous Queerty reader has sent us this image, allegedly depicting Mayer and Hart in flagrante. It looks pretty clear that, yup, they were humping like rabbits in clear view of bystanders.
Is what they did a capital offense? Did they deserve to be taunted and humiliated?  Of course not.