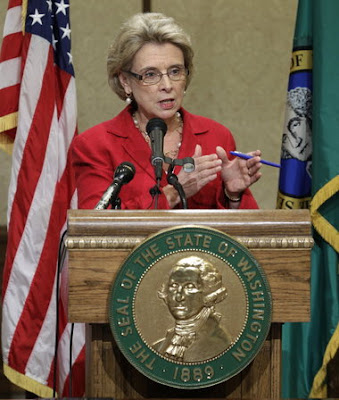 2012 is starting off well with the march towards gay rights in the U.S.  Here is another Governer working to grant equal marriage rights for the GLBT community.  With national polls showing a majority support for Gay Marriage, politicians are slowly but surely following the public on this issue.

She said at a news conference she'll introduce the bill that, if passed by the state Legislature, would allow same-sex couples to obtain a marriage license in Washington state.
"It is time. It's the right thing to do and I will introduce the bill to make it happen," said Gregoire. "Once again, the call for equality is sweeping through our nation and this time it's for our gay and lesbian couples."
Gregoire said the law would not require churches or other religious institutions to perform gay marriage ceremonies.

In November, a coalition called Washington United for Marriage announced it would lobby the Legislature to approve a gay marriage this year. In 2009 the Legislature passed, and voters later upheld, a bill that greatly expanded the rights of same-sex domestic partners. That measure was known as the "everything but marriage" bill. Nearly 19,000 people in Washington state are registered as domestic partners.
“I think (Gregoire’s) support certainly helps, but we still have the struggle and we don’t have the votes yet, but I think we’re going to get them this year,” said Sen. Ed Murray, D-Seattle, who is openly gay.
chris gregoire gay marriage washington state