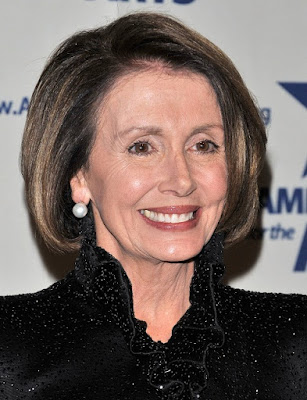 This is a very good thing that Nancy Pelosi did!  There are certain benefits that can only come with federally recognized gay marriage.  You can't create a contract that guarantees social security survival benefits.  You can't guarantee that your partner is protected from deportation without federal marriage recognition.
Via ThinkProgress.org:
As ThinkProgress has often reported, many binational gay couples live in constant fear of being separated by deportation because the Defense of Marriage Act (DOMA) prevents the federal government from recognizing their relationships. But for one San Francisco couple at least, the story has a happy ending, thanks to House Minority Leader Nancy Pelosi (D-CA).
Pelosi personally intervened on behalf of two of her constituents, Bradford Wells and Anthony John Makk, a couple who have lived in San Francisco’s Castro District for the better part of 19 years and were married in Massachusetts in 2004:

Makk is an Australian citizen who was facing deportation after the couple was denied spousal immigration benefits under the 1996 Defense of Marriage Act, which blocks federal benefits to same-sex couples.
Wednesday the U.S. Citizenship and Immigration Services sent the couple a letter that they have been granted a two year deferred action on deportation. Pelosi, who represents San Francisco, personally intervened on behalf of the couple to ensure that Makk could stay in the country.
“The positive resolution of Anthony’s immigration petition is a personal victory for Bradford and Anthony, and keeps this loving couple together,” Pelosi said in a statement. Pelosi told the couple about the ruling herself Wednesday.