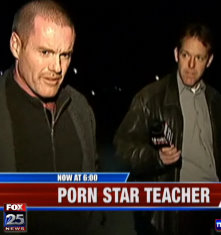 
A reporter in Boston named Mike Beaudet found out and decided this was very important information for all to know.  He filed this video report:

So, this teacher who was causing no harm and did nothing illegal or immoral is most likely out of a job.  He'll probably never teach again.

Several facebook pages in support of the teacher have been created including this one.