Poor Anti-Gay Bullies Are Such "Victims" 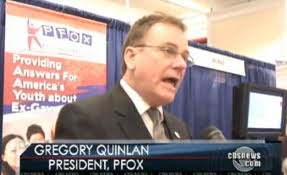 Woe is she!  Poor Greg Quinlan, who claims not to crave cock anymore is whining that he and other anti-gay bullies are being bullied.  How dare we call them out on their hatred and homophobia!

Via The Advocate:
“Ex-gay” advocate Greg Quinlan is one of the latest conservatives to cast himself as a victim, and it has gay activist Wayne Besen steamed.


Quinlan, president of Parents and Friends of Ex-Gays and Gays, who says he is an ex-gay, did an interview last month with a Washington, D.C., TV station in which he described “hatred” and “bigotry” directed at ex-gays, who he said deserve protection under hate-crimes laws. He accused Besen, executive director of Truth Wins Out, of saying, “Somebody needs to run Greg over. He needs to be hit with a bus. Somebody should inject him with AIDS.”


On a side note: Gregory was married to a woman who claimed not to crave vagina anymore.  They were paraded around fundamentalist circles as "proof" that gays and lesbians can become straight.  They Divorced in 2007.