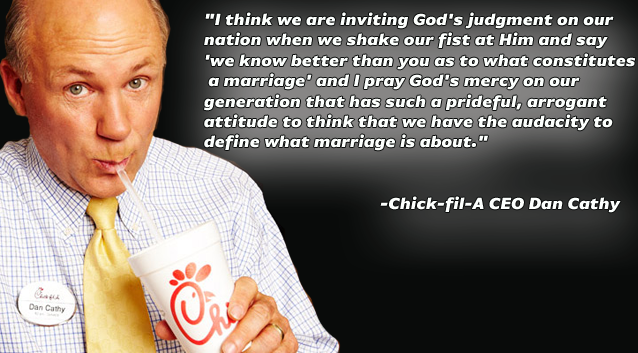 This is not an article from The Onion. This is real.  As you can expect, it's not going over very well.  The Urban League of Greater Atlanta defends its decision on its Facebook page by citing all the money he has given to the community.   So, to the Urban League, money = equality.  They are turning a blind eye to all the money Dan Cathy's foundation has given to anti gay organizations around the world.


This year’s theme is “Celebrating Champions of Justice and Equality.”

Honorees of the prestigious recognition this year include Congressman John Lewis, who is truly a shining beacon of equality, civil rights, and justice for all and Chick-fil-A CEO Dan T. Cathy. You may remember Cathy and the statements he made against gay marriage that sparked headlines throughout the world and a boycott of the chicken restaurant.

Yes, Dan Cathy has since made amends with gay rights activist groups and has stopped donating to organizations that are overtly anti-gay, but his position on gay marriage remains the same. And the corporation is seemingly still donating large sums to organizations like the Marriage & Family Foundation and Fellowship of Christian Athletes, which both promote marriage in the ‘biblical sense’ and are strongly and openly opposed to same-sex marriage.

So, Chick-fil-A has basically taken steps to make themselves look better because it was hurting their business … but nothing really changed.