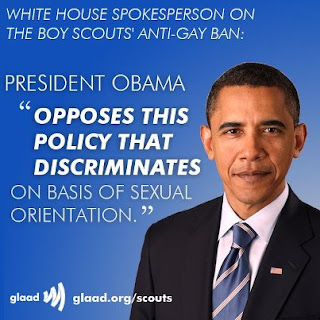 As does Mitt Romney.  Even with the Chick Fil A "reframing" loss, the march for gay rights is gaining momentum.  For the sitting President and his challenger to both vocally support opposition to this ban says volumes on the status of the "culture war"
Via Huffington Post:
President Barack Obama expressed his opposition to the Boy Scouts of America's reaffirmation of its policy of excluding gays on Wednesday.
The president called the rule, which was renewed in July after a two-year review, "discrimination" in a statement to theWashington Blade.
“The President believes the Boy Scouts is a valuable organization that has helped educate and build character in American boys for more than a century,” White House spokesperson Shin Inouye said. “He also opposes discrimination in all forms, and as such opposes this policy that discriminates on basis of sexual orientation.”
The ban has been faced with opposition by some former scouts, several of whom returned their badges in protest of the rule. Republican presidential hopeful Mitt Romney also expressed opposition to the ban, saying "all people should be able to participate in the Boy Scouts regardless of their sexual orientation."
barack obama boy scouts gay ban mitt romney