Trump, still Contagious, Gasping for air and wincing in pain 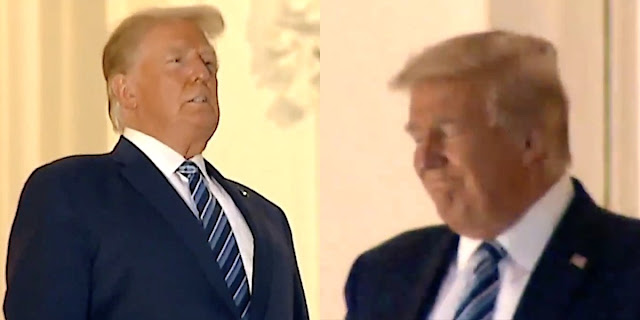 Watching Trump's release from Walter Reed Hospital and his photo op moment on his balcony, you can clearly see him gasping for air and, at points, wincing in pain. I am not of the believe that he is faking this disease. You can see it having a huge affect on his breathing.

In videos shot after Donald Trump returned to the White House from Walter Reed Medical Center but before he shot (the helicopter is still there) last night’s propaganda video, the president appears out of breath and in some pain, suggesting his “domination” of the virus isn’t all he cracked it up to be. Shortly after these clips were posted, #GaspingForAir trended on Twitter.

Trump appears to be wincing in pain while he breathes pic.twitter.com/YKhGhu0VN0