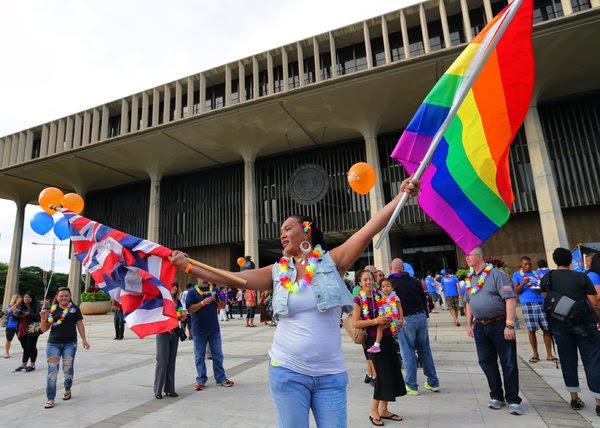 I think you can figure out which is which!  Congratulations to the 15th State to make Gay Marriage legal.  They are also making it possible to apply for the license and get married on the same day. Well done, Hawaii!!

Via The Christian Science Monitor:


Retired professors Rod Powell and Bob Eddinger have been partners in life since they met at the University of Hawaii in 1977. On Monday, they joined in marriage on the first day their home state allowed same-sex couples to form such unions.

Powell, 78, and Eddinger, 74, have raised three children and cared for ailing parents in their 36 years together. They tied the knot on Monday to be among those marking the civil rights milestone for gays and lesbians."I said to Bob, 'Would you choose me again?' And he looked at me and said 'I choose you every day.' And I think that says it all about how we feel about each other," Powell said in an interview before they signed their marriage papers.

"We chose to do it this day to celebrate it as a very significant forward movement in the transformation of society toward equality and justice," Powell said....

...Hawaii helped start the national gay marriage discussion more than two decades ago when a same-sex couple was denied a marriage license, leading to a court fight that eventually prompted Congress to pass the Defense of Marriage Act in 1996. Part of that law, which stipulated that marriage was between a man and woman, was struck down earlier this year by the U.S. Supreme Court.