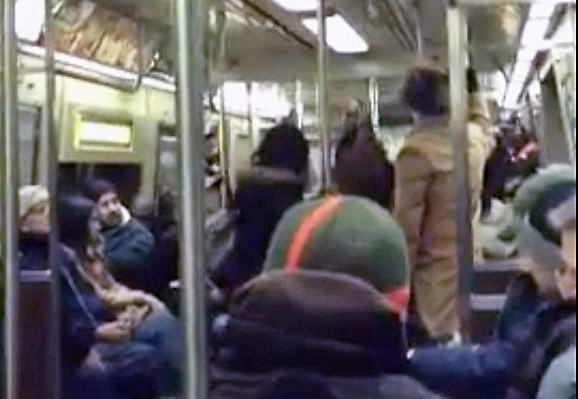 Everyone has the right to free speech.  That means the government can not arrest you for voicing unpopular ideas.  This includes the idiot evangelical nut job AND the gay man that shouts him down to the applause of the subway car.

I can’t believe I teared up watching this video.  Apparently New York has been plagued by nutjob evangelical preachers on their subway trains.  They corner people, like little religious hostages, in subway cars, and yell at them about how they’re all going to hell. Well, one gay New Yorker wasn’t going to take the anti-gay diatribe from the anti-gay bigot evangelical accosting his subway car.  He stood up and shouted the man down, and then something wonderful happened. The entire car of NYC commuters applauded the gay man.“What the hell are you teaching our children?” the evangelical bigot is yelling at the car-full of commuters, in the middle of an anti-gay diatribe.This goes on for almost two minutes – the preacher screaming, and the gay man talking over him.The gay man yells over him, “You are bad and full of hate. You are false.  You are a false prophet. Do not listen to this man, he’s scared, he’s full of hatred.”