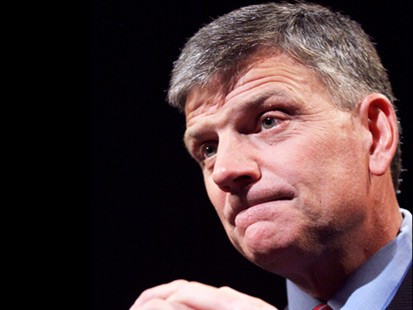 Doesn't it always come down to money with these guys?
Via The Advocate:
Forget the fiscal cliff; televangelist Billy Graham's son Franklin Graham says marriage equality sends us teetering on the edge of the "spiritual cliff." In ablog post last Thursday,Graham wrote that our country’s financial problems "are nothing compared to the spiritual and moral cliff that is far more destructive to our nation than any economic concerns. Since the recent election, we’ve seen same-sex couples lining up at courthouses in several states to receive their marriage licenses, and hundreds of people gathering in public places to light up marijuana cigarettes in the states where it has just been decriminalized."
He says that these marriages are only the "tip of the iceberg," as "media-friendly gay and lesbian behavior" on TV is just a reflection of "the moral corruption that has infected our entire nation."
What does the prodigal son want  you to do to fight these "dark days"? Pray, read the Old Testament, and send him money, apparently.
See Graham's original money raising blog post here.
fiscal cliff franklin graham fundraising gay marriage