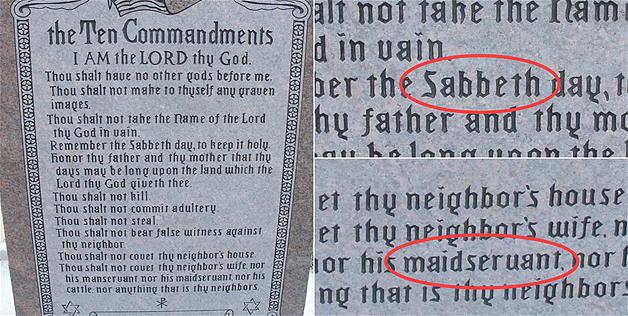 The modern Republican party has never been a fan of the "Separation of church and state".  They use God and religion to force their beliefs on to everyone else.  We gays know this all too well.

Now, it seems that the Republican party has created a new concept.  The "Separation of brain and state" is a political ideology that is being practiced not just by Oklahoma Republicans, but the entire GOP.  They hate science. They hate statistics. They hate facts of any kind that disprove their beliefs.  Now, it seems they hate spelling.

Oklahoma state Congressman Mike Ritze has been at the center of the controversial subject of placing a monument of the Ten Commandments in front of the state capitol at Oklahoma City. Ritze has been the most public and vocal champion of the monument, but he first has to complete another task. It seems the monument contains obvious spelling errors, with which the irony abounds.


Granted, this is a silly example.  Everyone makes mistakes.  I'm sure my blog is riddled with them, considering the amount of wine consumed when most of the posts are written.  This story in Oklahoma merely serves as a symbol of the rampant incompetence of Republicans in all levels of government.  When you hate government as much as you hate facts, you're probably not going to be any good at running it.

h/t to Hysterical Raisins for the phrase.