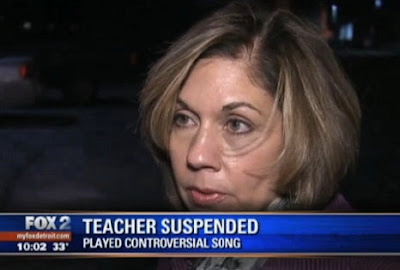 South Lyon's Centennial Middle School teacher Susan Johnson should be applauded for teaching tolerance and diversity to her students.  Instead, she was suspended.

A Michigan-based performing arts teacher has been suspended for playing a song about being gay to her students in class.
Susan Johnson, who teaches at South Lyon's Centennial Middle School, said one of her eighth grade students asked if he could play a song in class. The tune in question was "Same Love," performed by Seattle-based hip-hop artist Macklemore and produced in support of marriage equality.
"I asked him a few questions about the song...if it was violent, if there was any profanity, and he said no," Johnson told WJBK. "I really love my kids and I never want to hurt them, but I also know that there's a lot of bullying and there's a lot of gay bashing and racial issues going on in our country and I want the kids to feel comfortable in my class no matter who they are."

You can see the news video by clicking here
Here is the video of the song "Same Love" by Macklemore and Ryan Lewis featuring Mary Lambert.