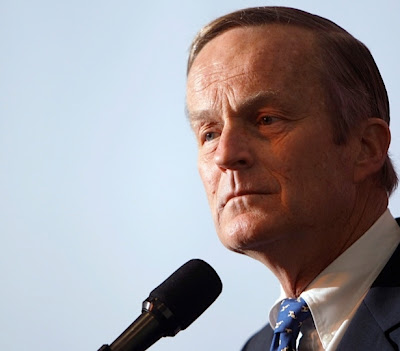 He loses his senate race for being a misogynist and a rape enabler.  He was in the clear lead until he showed his true colors.  Now, on his way out of congress, he is attacking gay veterans.  What a dick!!
Via Huffington Post:
Rep. Todd Akin (R-Mo.) lost to Democrat Claire McCaskill in November and will soon leave the House of Representatives. Before he goes, however, Akin wants to push one last anti-gay bill to undermine the repeal of Don't Ask, Don't Tell.
In May, Akin first proposed the anti-gay bill, essentially a "license to bully," for the 2013 National Defense Authorization Act, according to Think Progress.
Akin's "conscience clause" would purportedly protect the religious liberties of military personnel who disagree with homosexuality. Under the bill, the U.S. military must “accommodate the conscience and sincerely held moral principles and religious beliefs of the members of the Armed Forces concerning the appropriate and inappropriate expression of human sexuality," according to the Washington Blade.
The Senate passed another version of the bill in December, without Akin's anti-gay proposal, according to Mother Jones. Now, the Missouri representative is pushing for its final approval, along with Sen. John McCain (R-Ariz.) and Rep. Howard McKeon (R-Calif.). "They're pushing pretty hard," a House Democrat told the website.
congress DADT defense authorization act don't ask don't tell legitimate rape todd akin