Give The Salvation Army These Vouchers Instead Of Cash

on November 23, 2012
We all know that the salvation army is an avidly anti-gay organization.  What you can do is send them a message in a peaceful way.  Now you can download a voucher to print out and put in The Salvation Army donation buckets.  Simply click on the image, then save the image or print it out and cut into 3 vouchers. 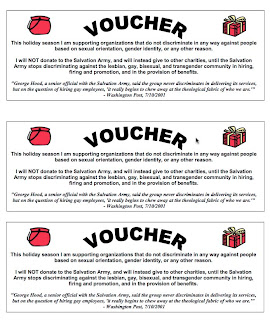 Many people don’t realize that the Salvation Army is a nasty, bigoted, anti-gay, far-right evangelical church.  Read it in their own words – I copied this from the Salvation Army’s Australia Web site a few years back:


“[Homosexual activity is] as rebellion against God’s plan for the created order…. Homosexual practice, however, is, in the light of Scripture, clearly unacceptable. Such activity is chosen behaviour and is thus a matter of the will. It is therefore able to be directed or restrained in the same way heterosexual urges are controlled. Homosexual practice would render any person ineligible for full membership (soldiership) in the [Salvation] Army.” – Salvation Army Australia Web site (emphasis added)