Think of the children!!!  What would happen to their fragile young minds if they saw a man in a dress?  Uh...children don't care about who is in a dress or who is gay.  They are taught by their homophobic parents that it is wrong.

Multiple passengers, who say they have tickets for Carnival Cruises’ upcoming “Drag Stars at Sea” cruise, say Carnival sent them an email informing them that passengers will be banned form dressing in drag on the drag cruise, under penalty of being kicked of the cruise.

Carnival attracts a number of families with children and for this reason; we strive to present a family friendly atmosphere. It is important to us that all guests are comfortable with every aspect of the cruise. Although we realize this group consists solely of adults, we nonetheless expect all guests to recognize that minors are onboard and, refrain from engaging in inappropriate conduct in public areas.
Arrangements have been made for drag performances in the main theater featuring stars from LOGO TV. These functions will be private and only the performers are permitted to dress in drag while in the theater. Guests are not allowed to dress in drag for the performances or in public areas at any time during the cruise.
We’re sorry to say that any guest who violates our policies and/or whose behavior affects the comfort and enjoyment of other guests, will be disembarked at their own expense and no refund will be given.

It really looks worse when you see the "alleged" email that was sent to the passengers. 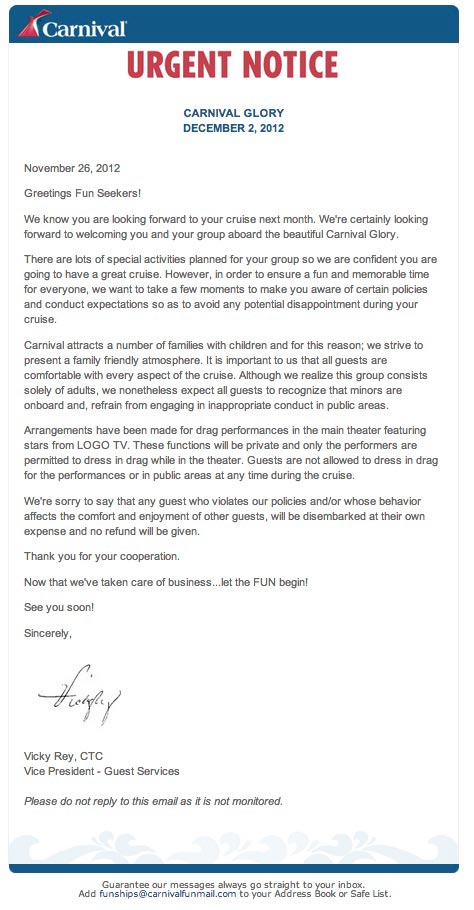 Carnival is now apparently claiming that the ban on drag during the drag cruise is because of post-9/11 security restrictions.  Uh huh.  And that’s why straight passengers on non-gay Carnival cruises report wearing costumes all over the ship and NOT receiving the same security warning that gay passengers got for their drag cruise.
carnival cruises drag ban drag race gay cruise homophobia rupaul Rupaul's Drag Race