Secret Romney Video: Proclaims His Disdain For Half The Country 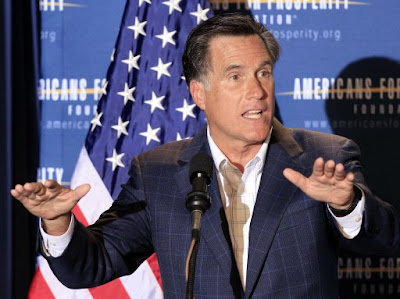 Mother Jones has released a very damning video of Mitt Romney at a closed door fundraiser to a crowd of millionaires, where he voices his lack of caring for 47% of Americans.


"There are 47 percent of the people who will vote for the president no matter what. All right, there are 47 percent who are with him, who are dependent upon government, who believe that they are victims, who believe the government has a responsibility to care for them, who believe that they are entitled to health care, to food, to housing, to you-name-it. That that's an entitlement. And the government should give it to them. And they will vote for this president no matter what…These are people who pay no income tax." - Mitt Romney

Oh, and there's some serious irony as to who leaked the video to Mother Jones. Jimmy Carter's Grandson!

Additional pieces of the tape were then added to a YouTube account called"Anne Onymous" starting three weeks ago. "There was a minor uproar about it on Twitter when I found [the first clip], so I kept doing research on it and that eventually led me to be able narrow down who it originated from," said Carter. Via Twitter, he contacted the person who claimed to have secretly taped and uploaded the video, and then sought to help publicize the remarks. "That seemed to be the purpose of [the filming] — to get it to a larger audience," Carter said.
Having worked with Corn before, Carter noted, "It was a natural fit." He put the anonymous video source in touch with the Mother Jones reporter and then butted out, knowing he was onto something. "Any time that you can find a clip that strengthens the narrative already established, that's what becomes a big deal," Carter explained. "I've been trying to get paid for this but it hasn't worked out yet. This might help."

We'll, at least Carter was motivated by Mitt's God...Capitalism

The Tax Policy Center found that in 2009, following the financial crisis, 17 percent of households did not pay any federal income tax or payroll tax, mostly students, the elderly and the disabled.  (my emphasis)

So, Mitt has disdain for mostly students, the elderly and the disabled because they are a bunch of freeloaders!!