Snuggie Lovin' Guy Does Beyonce's "Countdown" With Her In Video Smashup 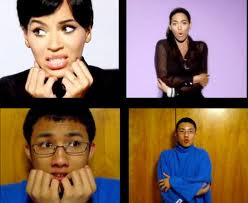 I was in Berlin, Germany at a sex toy convention.  My coworker knew all the moves to "Single Ladies (put a ring on it)" and that song was big, it played over and over at the convention...so I got a front row seat to each of his performances!...Even while female "dancers" were squatting over unsuspecting German youth about to be defiled on stage,  my coworker could outdance the girls with his gyrations and dead on Beyonce choreography. He rocked it!!  Just like this kid!

Via Huffington Post:
We don't know much about YouTube user kkpalmer1000, but we know we love him.
And how could we not? His cover of Beyoncé's "Countdown" video, uploaded to the clip-sharing site on July 9, is not only a spot-on recreation of the (admittedly nearly flawless) original, but also prominently features a Snuggie. You can see a side-by-side comparison of Beyoncé's version and kkpalmer1000's version above.
There isn't much else to say other than we can't stop hitting "replay."
(H/T Towleroad)
beyonce countdown kkpalmer1000 snuggie video mashup