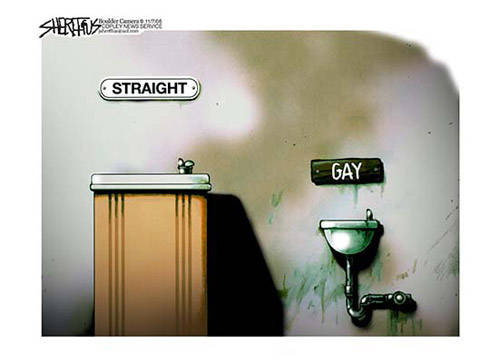 As Joe Biden would say, "This is a big fucking deal"!  Slowly, but surely, we are working our way towards equality.  Slowly, but SURELY!!

Via The Washington Blade:
The Democratic Party platform drafting committee approved on Sunday language endorsing same-sex marriage in addition to other pro-LGBT positions as part of the Democratic Party platform, according to two sources familiar with the drafting process.
Retiring gay Rep. Barney Frank (D-Mass.), who sits on the committee, told the Washington Blade on Monday that the 15-member panel unanimously backed the inclusion of a marriage equality plank after a national hearing over the weekend in Minneapolis, in which several witnesses testified in favor of such language.
“I was part of a unanimous decision to include it,” Frank said. “There was a unanimous decision in the drafting committee to include it in the platform, which I supported, but everybody was for it.”
Frank emphasized that support for marriage equality is a position that has been established for the Democratic Party, from the president, who endorsed marriage equality in May, to House Democratic lawmakers who voted to reject an amendment reaffirming the Defense of Marriage Actearlier this month.
democratic platform dnc gay marriage