You've got to give it to old Ratzinger.  If you hate the gays that much, you put one of your gay hating-est minions in their "back yard".  Sorry, it was there. I took it.

Pope Benedict XVI has appointed a new Archbishop of San Francisco: Salvatore Cordileone. Though his name is not yet widespread, Cordileone, currently the Bishop of Oakland, has already had massive success pushing an anti-equality agenda: he was the heart of the Catholic Church’s strategy to pass Proposition 8 in California, which eliminated marriage equality for millions of Americans. 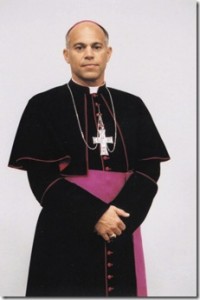 In 2008, Cordileone and a select cadre of Catholic leaders decided that their best chance to end marriage equality was to pass an amendment to the state constitution. Cordileone found the first major donor and built a lasting fundraising network for the group. He brought in an organization to lead the petition. He activated a network of California’s Catholic churches, and helped craft the Prop 8 messaging campaign, even using focus groups. The campaign was successful in passing Prop 8, making Cordileone a primary reason Californians are currently denied marriage equality. After the amendment passed, Cordileone bragged to a Catholic radio show that gay Americans never saw him coming, and called gay marriage a Satanic plot by “the Evil One” to annihilate morality.
archbishop gay marriage Pope Benedict salvatore cordileone san francisco