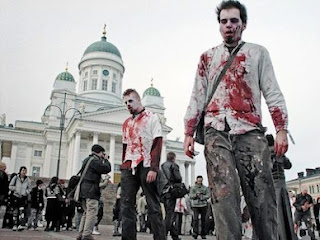 And The Zombie Apocalypse Begins!

One man is dead and another hospitalized after a bizarre assault off Miami's MacArthur Causeway reportedly forced a police officer to open fire.City of Miami police say the incident began Saturday afternoon about 2 p.m. when an officer responded to reports of 2 men fighting in the bike path of the Biscayne Boulevard exit ramp, alongside the Miami Herald's parking garage. There, according to the Herald, the officer observed a naked man eating another man's face: