And Yet Another Study Shows Homophobes Are Closet Cases 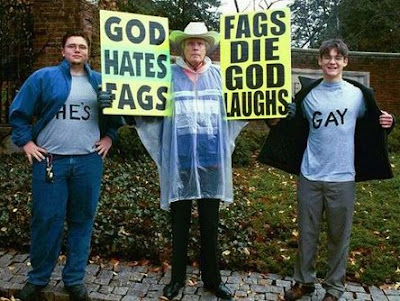 We need to make this point over and over.   This should become common knowledge so our unfortunate closet case brethren will think twice before they publicly work to deny us our rights.  Anyone who is actively promoting anti gay policies should be assumed to be a self-loathing closet case.
Via RawStory:
People who have negative feelings toward homosexuality often have secret attractions to the same sex — and are more likely to have grown up in households that forbid homosexual feelings, according to a recent study.
A research team from the University of Rochester, the University of Essex, England, and the University of California in Santa Barbara found that “[h]omophobia is more pronounced in individuals with an unacknowledged attraction to the same sex and who grew up with authoritarian parents who forbade such desires.”
“Individuals who identify as straight but in psychological tests show a strong attraction to the same sex may be threatened by gays and lesbians because homosexuals remind them of similar tendencies within themselves,” the study’s lead author, Netta Weinstein, explained.
“In many cases these are people who are at war with themselves and they are turning this internal conflict outward,” co-author Richard Ryan added.