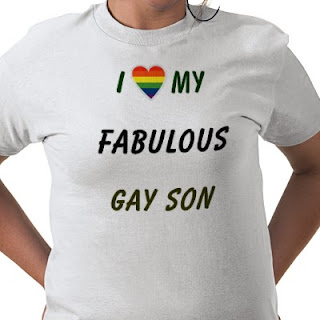 I knew I was gay when I was about 4.  I didn't know what to call it or how to define it.  It was a different time and I didn't even know who or what to ask about it.  It thrills me that in some areas of this country, parents like this are raising such brave and self aware children.  What a wonderful mom!
Via The Huffington Post:
My son was in another room talking to the big kids. They were fourth graders, 9- and 10-year-olds who are very cool, hip, and mature (according to my kid, anyway). They were a mix of girls and boys, and most of the girls were talking about which boys they thought were cute, and who was whose boyfriend or girlfriend. The boys were frequently providing commentary.
My son piped up, "Blaine is my boyfriend." (Blaine is a gay male character on Glee.)
"You're supposed to have a girlfriend," one of girls snapped back, all snotty.
My kid shook his head. "No, I'm gay," he said. "I have boyfriends." Giggles came from all the girls, and one of the boys looked at him quizzically.
"Really?" the boy asked.
"Sure," said my son with a shrug. And the conversation moved on to the music on everyone's iPods.
As I watched this conversation happen, two things went through my mind:
I am finding myself having a lot of conversations with parents lately. Part of me is annoyed that I feel I should, but the larger part of me knows it's necessary. So why I am I annoyed? Because I really don't think it should be a big deal. My son isn't hitting or biting people. He isn't a danger to anyone. He's just sharing something about himself. Other parents don't have special conversations when their kids turn out to be left-handed (coincidentally, left-handed people about 10 percent of the population, as well). And to me, being left-handed is just about as morally wrong as being gay: not at all. So why should I have to alert people that my son identifies as gay?
But I do, and it is for a few good reasons, the top of one being that my son is only 7 years old. An out first grader isn't exactly an average kid. I have the only one I know. It surprises people, and they have questions:
"Why does he say that?"
"Does he know what that means?"
"Haven't you told him to not say that?"
The questions are so common now that I can rattle off the answers without much thought:
"Because he likes boys, thinks they're pretty, and romanticizes them."
"Yes, he knows that boys who want to kiss boys and want to marry boys are gay."
"Hell no! I will never tell my child to stop saying something that honestly describes him, or even imply there is anything wrong with being gay."