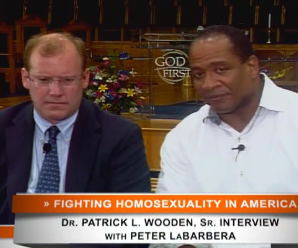 Don't you long for the days when kicking a faggot's ass was normal?  Peter LeBarbera and Patrick Wooden sure do! Of course, they claim that they aren't advocating violence.  But, it sure was better when you could!

On last week’s edition of Americans For Truth About Homosexuality Radio Hour, a self-described “former homosexual” called for the arrest of author Dan Savage for his campaign to end suicide among LGBT youth, and today host Peter LaBarbera and guest Patrick Wooden reminisced about when violence against gay and transgender people was considered “normal.”
Wooden, a North Carolina pastor and anti-gay activist with who has claimed that older gay men have to wear diapers after a lifetime of shoving a variety of objects and animals up their anuses, started the program by criticizing NAACP president Ben Jealous for addressing the National Gay and Lesbian Task Force’s Creating Change conference. In his speech, Jealous described how his childhood best friend whom he considered a brother was bullied not only because he is black but also because of his “preference for wigs, dresses and make-up.” Pastor Wooden said that the family should have “whooped” him and “taught the child how to dress,” saying that his “heart breaks” for the NAACP’s stance on LGBT rights.
Later in the interview, Wooden and LaBarbera both claimed that it was “normal” for men to violently react to a gay man they perceived to be flirting with them and LaBarbera even said he fears that it would be considered a “hate crime” for a man to punch a transgender woman using the woman’s restroom.


Wooden: My heart breaks and I literally mourn over what has happened to the NAACP. Ben Jealous says he has a brother who is transgendered in his family, the little boy grew up dressing like Diana Ross or somebody when he was a child, well I say his parents should’ve took the child and whooped the child’s behind and taught the child how to dress.
…
Wooden: If you want to get knocked out just go into a male bathroom in the African American community or any community I would think and you’re standing there in a dress and many times the people are trying to hit on people, trying to make sexual responses, one man there, you know, you don’t want to be in there feeling like another man is trying to look at your penis. We’ve always had a hostile response, or a disrespect if you will, for that kind of behavior.
LaBarbera: It used to be common of course, I’ve heard many stories. I remember a story from a military guy, saying a guy came and he was a sailor and they had some temporary little day off at port and some guy hit on him and he decked him.
Wooden: That’s normal.
LaBarbera: When you make a sexual advance against a man on man, that is a normal response, and yet I fear in the rise of political correctness what’s going to happen is, somebody is going to find out that there was a man in his wife’s—his wife was in the restroom when a transgendered man, a biological male, was in the female restroom and he’s gonna punch him, but then the man who punches him is gonna be charged with a hate crime, that’s what I’m afraid of.
Wooden: We’re not promoting, advocating violence here.
LaBarbera: Of course not!