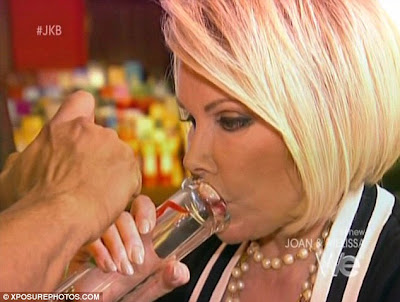 Getting stoned with Joan Rivers and Betty White? (see below)...That would be fun!!

The legendary comedian decided to get high after a stressful day hanging out with the parents of Melissa's then-boyfriend Jason Zimmerman. Joan's buddy Lynne helped her get a prescription for marijuana, which they decided to smoke, for some reason, in their parked car on a dead-end street. Soon, they realized they had the munchies -- and were in no condition to drive to a restaurant, or anyplace else. Naturally, Joan's first thought was to call her long-suffering daughter.

"My 78-year-old mother is now 17, and I've become a soccer mom yelling at her teenage kid," Melissa complained to the cameras.
Back in the car, Melissa told her mother that she was ashamed of her, buying drugs with her boyfriend's parents in town.

"No more than I was ashamed when you were in third grade and you lost a swimming meet!" Joan snapped back. "People are ashamed who love each other. You get over it."

Since Melissa wanted to avoid Jason's parents back at their house, she caved in to Joan and Lynne's chants of "Food truck! Food truck!" When they stopped for burgers and fries, stoned Joan became downright adorable, gushing to the truck's Venezuelan cook, "You have made a great meal. In a truck! Congratulations!" Back at the house, Melissa put Joan and Lynne to bed -- though somehow, they ended up in the hot tub, fully clothed and drinking out of one another's shoes. It's always a party when you're 78!

Earlier this week, Joan explained to the Huffington Post that she was given the marijuana prescription to deal with the pain from her most recent plastic surgery (shown in the first episode of the new series). She added that she hasn't smoked pot since "the dark ages," when she used to get high with Betty White. How much would we kill to watch that reality show?