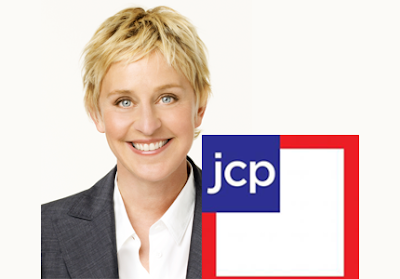 It seems that anti-gay threats of boycotts matter less and less these days.  How encouraging that the company that hired Ellen, and is now standing up to the anti-gay bigots, was also the company that threatened to pull their advertising when Ellen came out in real life and her sitcom in 1997.  I guess homophobia is slowly, but surely, loosing its' corporate clout.
Via Lez Get Real:
JC Penney’s is not only adamant about ignoring One Million Moms, which is an affiliate of the notorious hate group the American Family Associaiton, but they are making it clear- Ellen DeGeneres is staying put. OMM has been demanding that JC Penney’s fire DeGeneres because she’s openly lesbian.
JC Penney stated that it “stands behind its partnership with Ellen DeGeneres.”
Herndon Graddick, Senior Director of Programs and Communications at GLAAD stated “This week Americans spoke out in overwhelming support of LGBT people and J.C. Penney’s decision not to fire Ellen simply for who she happens to love, but while Ellen has the nation on her side, in 29 states today, Americans can still be legally fired just for being gay. Our elected officials should use this incident as yet another example of the support for legal protections for all hard working employees.”
In a press release, GLAAD also noted that:

Blogs including Joe My God, Think Progress, Lez Get Real and Towleroad first broke the news about the American Family Association’s demands to fire Ellen and joined GLAAD in calling on community members and allies to thank J.C. Penney. In an overwhelming display of support, a poll on the Los Angeles Times site shows 94% of readers polled agree that Ellen should not only maintain her post as J.C. Penney’s spokesperson, but call Ellen “a symbol of equality.”
Jeremy Hooper of Good As You notes that “One Million Moms- a project of the American Family Association” has a long history of working to strip LGBT people of vital protections, including actions against Johnson & Johnson after the company extended domestic partner benefits to LGBT employees and Cracker Barrel after the chain added workplace protections for gay and lesbian employees.

JC Penney has shown guts in standing up to the people who have a strong hatred for LGBT Americans.