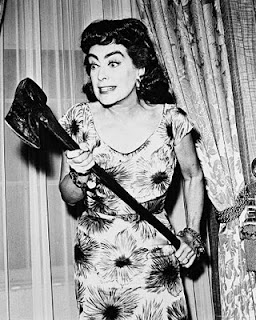 Don't fuck with her, fellas!!  You homophobic bitches better watch what you say!  If you spout some anti gay evil stupidity, Queen bitch Joan Crawford will rise from the dead and bitch slap you!!  I don't usually advocate violence but since it is only Hollywood magic, I say slap away!!


To quote Vera Donovan in Steven King’s Dolores Clairborne, “sometimes being a bitch is all a woman has to hold onto.”


Golden Age screen legend Joan Crawford was definitely a rhymes-with-witch in her lifetime, but we’re happy to see she’s using her nastiness for good in the afterlife. Here she materializes into a Fox News clip to give Rick Santorum a good thrashing for defending Don’t Ask Don’t Tell and saying gays can go straight if they really want to.
The clip comes courtesy of Gay Carrington, which sounds like the name of Blake’s otherillegitimate sister on Dynasty.
Enjoy!