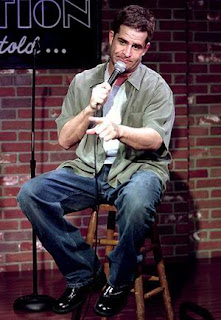 Todd has been one of my favorites, listening to Pandora "Today's Comedy Radio".  Good for him for coming out!

Via The Advocate.com:
Comedian Todd Glass, who appeared on the second and third seasons of NBC'sLast Comic Standing and has appeared regularly onLouie, Tosh.0, Jimmy Kimmel Live!, Late Night with Conan O'Brien, Tough Crowd with Colin Quinn, and Politically Incorrect, came out as a gay man today on an episode of WTF with Marc Maron.
After a bit of banter, Maron told viewers the 47-year-old comic was on his podcast to say something important. Glass joked that he's there simply for self-promotion, then Maron responded, “I thought you were gay." He suggested Glass say it himself.“I have a very hard time saying that,” Glass said. “And don’t get this wrong. I don’t want anyone to be ashamed of who they are—especially younger people. I always hated using that term and that’s partly why I’ve always been sympathetic to people who don’t [want to be labeled certain things]. I hate that word. But I like it better than the other word—homosexual.”
comedy coming out mark maron todd glass