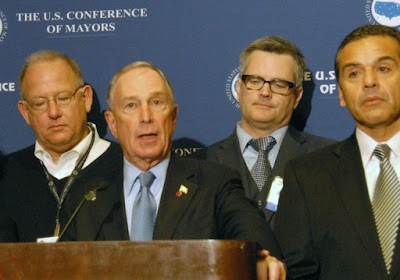 America's cities are, once again, leading the way towards a more progressive country.
Via The Advocate:
More than 80 mayors from across the country announced their support for  marriage equality today, predicting that it would one day come to all of their cities.
They pledged their support as part of the launch of a new effort called Mayors for the Freedom to Marry. Included are mayors of the five largest U.S. cities:  Michael Bloomberg of New York, Antonio Villaraigosa of Los Angeles, Rahm Emanuelof Chicago (who was not at the news conference but signed the pledge), Annise Parker of Houston, and Michael Nutter of Philadelphia.
All of the mayors have signed a pledge to fight for marriage equality and encourage other lawmakers to take up the cause.
After New York enacted marriage equality last year, Bloomberg said the freedom to marry in the state has “only made New York stronger,” and extending that right to all American citizens is only a matter of time.
“For me, the question is not if marriage equality will come to all 50 states. The question is when, and with America’s mayors standing up for what is right in their cities, I believe that day will come sooner than most people think,” he said at the news conference, which was held during the U.S. Conference of Mayors in Washington, D.C..
Bloomberg said he would welcome President Obama speaking out unequivocally on marriage equality. So far, Obama has said only that his views on the issue are “evolving.”
Villaraigosa, president of the U.S. Conference of Mayors, emphasized the need to set aside partisan divisions, saying “the more support we build in our cities and states, the stronger the case we can make for extending the freedom to marry.”