The Salvation Army Is Very Anti-Gay 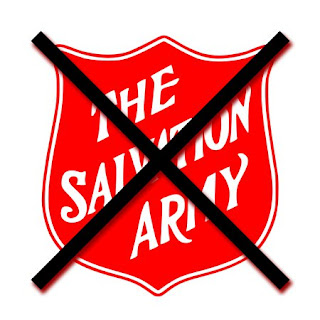 During the holiday season (yes, I am a soldier in the war on Christmas...jk) people feel extra generous.  We want to help those in need.  We want to help charities make the world a better place.  That does not happen when you donate to the Salvation Army.

From the Salvation Army's website:
Sexual attraction to the same sex is a matter of profound complexity. Whatever the causes may be, attempts to deny its reality or to marginalize those of a same-sex orientation have not been helpful. The Salvation Army does not consider same-sex orientation blameworthy in itself. Homosexual conduct, like heterosexual conduct, requires individual responsibility and must be guided by the light of scriptural teaching.Scripture forbids sexual intimacy between members of the same sex. The Salvation Army believes, therefore, that Christians whose sexual orientation is primarily or exclusively same-sex are called upon to embrace celibacy as a way of life. There is no scriptural support for same-sex unions as equal to, or as an alternative to, heterosexual marriage.


Here is a great video explaining what the salvation army does to harm the gay community.  It also mentions alternative charities that both help people and are NOT anti gay like the Salvation Army.

Here is some of the worldwide anti gay efforts by the Salvation Army:


Via Boycott The Salvation Army Facebook Group:
In 1986, the Salvation Army gathered signatures against the repeal of a New Zealand law criminalizing homosexuality. (http://tinyurl.com/2vfpvba)

In 2000, the Salvation Army in Scotland spoke out against the repeal of Section 28, which prohibited schools from treating homosexuality as acceptable. (http://tinyurl.com/yb4hvnr)

In 2001, the Salvation Army secretly made a deal with the Bush administration to exempt them from local ordinances outlawing discrimination against gay people. The deal fell through when internal SA documents were exposed by the Washington Post. (http://tinyurl.com/5e3awh)

In 2004, the Salvation Army threatened to close all their soup kitchens and homeless shelters in New York City instead of following an ordinance requiring city contractors to provide equal benefits to domestic partners. Discriminating against gays was more important to them than helping the poor. (http://tinyurl.com/2ef7kdm)


So when you give to the Salvation Army bell ringers at various shopping centers you are giving to an anti gay evangelical church.  One that actively works against gay rights all over the world.