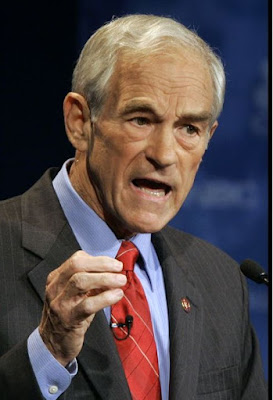 His newsletters weren't just anti gay. They were filled with racism and anti government paranoia among other ideas that may take his current supporters by surprise.

Via The New Republic:
For years, Ron Paul published a series of newsletters that dispensed political news and investment advice, but also routinely indulged in bigotry. Here's a selection of some especially inflammatory passages, with links to scanned images of the original documents in which they appeared.


The December 1989 Ron Paul Political Report contains entries on a “new form of racial terrorism,” cites former Congressman Bill Dannemeyer’s claim that “the average homosexual has 1,000 or more partners in a lifetime,” and quotes Lew Rockwell, president of the Ludwig von Mises Institute, in the third person.
In January 1990, the Ron Paul Political Report cites “a well-known libertarian editor” who “told me: ‘The ACT-UP slogan on stickers plastered all over Manhattan is ‘Silence=Death.’ But shouldn’t it be Sodomy = Death’?”
The September 1994 issue of the Ron Paul Survival Report states that “those who don’t commit sodomy, who don’t get blood a transfusion, and who don’t swap needles, are virtually assured of not getting AIDS unless they are deliberately infected by a malicious gay.”
The June 1990 issue of the Political Report says: “I miss the closet. Homosexuals, not to speak of the rest of society, were far better off when social pressure forced them to hide their activities.”
A January 1994 edition of the Survival Report states that "gays in San Francisco do not obey the dictates of good sense," adding: "[T]hese men don't really see a reason to live past their fifties. They are not married, they have no children, and their lives are centered on new sexual partners." Also, "they enjoy the attention and pity that comes with being sick."