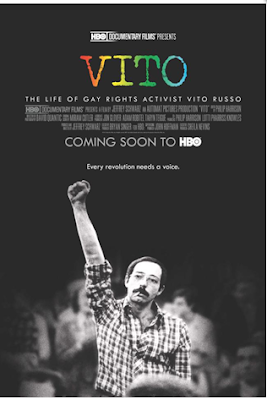 I am very much looking forward to seeing this documentary about the life of Vito Russo.  Back in my college days, I wrote a term paper and did a presentation based on, in large part, his book "The Celluloid Closet".  I was still pretty much isolated and did not know any other gay people in my personal life.  His book was a connection to the gay world for me.
Via Back2Stonewall.com:
Vito Russo is one of our LGBT History’s greatest heroes.
Vito an  LGBT activist, film historian was a founding member of Gay Activists Alliance and participated in every significant milestone in the gay liberation movement, from Stonewall to Act Up.  Russo’s concern over how LGBT people were presented in the popular media led him to co-found the Gay and Lesbian Alliance Against Defamation (GLAAD) and to write “The Celluloid Closet,” the first book to critique Hollywood’s portrayals of gays on screen.  HBO will air  “VITO” a 2011 Documentary which Premiered October 14, 2011 at the 49th New York Film Festival at Lincoln and will air it during Gay Pride Month, June 2012.
His book was then turned into a documentary.  Author Armistead Maupin (Tales of the City) wrote Lily Tomlin's narration for the film.  It was also aired by HBO and is available at Amazon.com (affiliate link)
gay cinema gay history hollywood vito russo