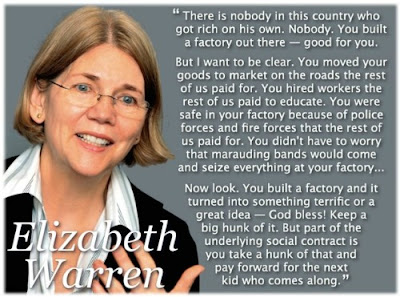 A Few weeks ago,  Laurel Ramseyer posted her concern on PamsHouseBlend regarding Senate candidate Elizabeth Warren's support for GLBT issues.  Gladly, it seems her concern was unwarranted.

Via ThinkProgress.org
Elizabeth Warren — who is challenging Scott Brown’s (R-MA) senate seat in Massachusetts — is reiterating her support for same-sex marriage and greater equality for lesbian, gay, bisexual, and transgender people in the workplace. Warren also joined the growing list of lawmakers calling for the repeal of the 1996 Defense of Marriage Act, which prevents the federal government from recognizing married gay couples and offering them federal benefits:


"I’m deeply proud to be from Massachusetts because the Commonwealth has been the nation’s leader in protecting and promoting equality – from marriage equality to the recently passed Transgender Equal Rights Bill. Congress and the President have also recently taken historic steps forward in promoting the cause of fairness and equality: the passage of the Matthew Shepard and James Byrd, Jr. Hates Crimes Prevention Act and – after years of effort – the repeal of “Don’t Ask, Don’t Tell.” [...]
As other states grapple with whether to support marriage equality, I’m ready to move to the next step: End the two-tiered system created by the Defense of Marriage Act. Our federal government should not be in the business of selecting which married couples it supports and which it treats with contempt. States define marriage among couples, and, once married, all those couples and their families should have the same protections, the same benefits, and the same tax treatments. Fairness and equality are foundational values in our country, and nowhere is that more important than in our families.
In the workplace, people should be hired for what they can do and evaluated on their performance – period. I strongly support the fully inclusive Employee Non-Discrimination Act. Particularly in these uncertain times, people must have confidence that they will be judged on the merits. Again, this speaks to the fairness and equality that mark us as a people."

If you haven't seen this video of her in defense of the middle class and fair taxation for all Americans, here it is.