on November 19, 2011
So, the GOP is first to scream "un-American" when you disagree with them...about anything!  But booing an active duty soldier currently serving in Iraq is perfectly acceptable...because he's gay. And none of the Republican presidential candidates call the audience members out on it because they are too busy kissing extremist ass!

Here is an excerpt of the soldier being interviewed. 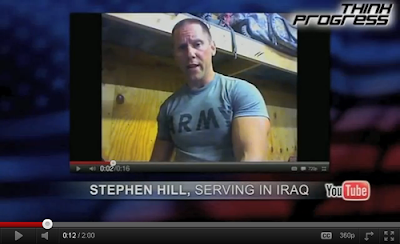 Via The AP:
"When the actual booing occurred, my gut dropped out, because my first inclination was, did I just do something wrong?" he said. "The answer, obviously, wasn't very supportive of gay people, and there was a lot of fear of how the Army would take the question."
He did not have to wait long to find out. At breakfast later that morning, the segment was playing on the chow hall television. Hill immediately tracked down his commander, who told him she had no problem with what he'd done but that she would need to run it up the chain of command. She later relayed the response.
"She said, 'What the military's most concerned with is that you are OK, because it's a lot of pressure on you and we want to make sure if there is anything we can do to help,'" he recalled.
It's pretty amazing that the military has come so far with this issue.  It's great to hear that this is the reaction that he got from his chain of command!

Here is the video of the gross behavior of the debate audience: