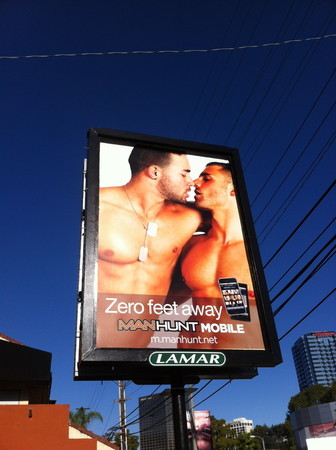 Uh...I lived in L.A. for seven years.  I have driven past many billboards that were actually offensive.  This isn't one of them.  This billboard show two shirtless guys...almost kissing.  The mom complains that she is forced to explain the billboard to her nine year old son.  Here's a suggestion..."it's a business that helps gay men meet each other"...DONE!

I never thought this would be me: A liberal feminist complaining about a sex-positive, homosexual billboard. Like that would ever happen.

Well, it has and here it is. Because I’m also a single mom complaining about her child’s premature loss of innocence, caused by driving past this billboard every day on the way to elementary school. Twice a day, since the image is on both sides of the billboard on Cahuenga, the only way to get to and from school for many Valley View Elementary families.
You try explaining the “Zero feet away MANHUNT MOBILE” phone application to your 9-year-old son. A 9-year-old who loves Army guys, and so noticed the dog tags right away.
It’s not the blatant porn-iness of the over-lit image, or that it is of two men. It would be equally annoying if it were hetero. It’s the fact that I am forced to figure out a way to frame to my fourth-grader the fact that some people like to find causal sex partners fast using their mobile phones.
I know some would tell me to use the opportunity for an illuminating conversation. But I don’t need Manhunt Mobile to set my Important Talks Agenda. Our family really could have gone awhile longer without that particular conversation—and should’ve been able to do so.
I guess what bugs me the most is the double standard.  There are TONS of straight sexualized billboards, much more explicit than this one, all over the streets of L.A. that I am sure our "gay friendly feminist" drives by with her son in the car. She made a choice to only complain about the gay one.  She needs to make this "a teaching moment"...for herself.


This reminds me of this commentary from The Advocate where more "gay friendly" parents were concerned that, during play dates, their gay parent friends showed any displays of affection in front of their children:
The conversation ended and we cleaned up our kids and paid the check. As we were heading for our cars, one of them turned to me casually and asked a favor:

“Oh, look ... I meant to ask you this earlier,” he said casually. “You guys don’t ever, you know, kiss — in front of the kids, do you? Not like, by accident or when you didn’t realize they were there ... but like, if they’re having a playdate or anything — you guys don’t strike me as the types who are into PDA?”

God forbid your precious snowflakes see two men display their love for each other.  It's not like you have ever kissed in front of them.  If you are so "gay friendly" what is the difference?
billboard hidden homophobia public displays of affection